Today’s offices often have lounge areas, recreational rooms, cafes, and even nap rooms. Work culture prioritizes keeping everyone happy with the right amount of workspace and rest areas, and a variety of spaces prevent people from feeling burn-out and keeps them motivated to perform at their best.

To keep your office a professional and fun environment, you want the best contractors to help you construct an office with a seamless design and construction process. This list compiles the best contractors, taking into account the awards, accreditations, features, and the number of years they have been in the industry.

David Andersen has been around construction since his teenage years, and graduated from the Construction Engineering Management Program (CEM) at Oregon State University in 1980. He later joined Andersen Construction full time and eventually become the firm’s president, aft to other services like residential and healthcare projects. Before David became president, the firm only provided industrial and retail projects. Today, with the expansion to residential and healthcare projects, the firm has garnered numerous awards, including the Regional Excellence for the 2020 U.S. Woodworks Wood Design Award and the Top 100 U.S. Contractor awards for 2018 and 2019.

The Yeon Building, built in 1911, was Portland’s first skyscraper at 15 stories tall. The 135,000-square-foot renovation achieved a Silver certification from the Leadership in Energy and Environmental Design (LEED). The building has become a green and energy-efficient property with upgrades to the lighting systems and water efficiency. Throughout the renovation process, the firm carefully preserved the building’s historical attributes, which are now complemented by modern designs and upgrades. As the first skyscraper in the area, the renovation preserves the area’s traditional roots while still updating it for modern times.

In 1998, Dan Peyovich entered Balfour Beatty, founded in 1995, as a project engineer and quickly rose the ranks to become the Washington State office president. He is currently the president of the Northwest operations, having held the position since 2015. He works with the local leadership teams in Washington State and Oregon for the strategic direction and general oversight. The firm won the 2016 National Design-Build Institute of America Project/Team Awards, the 2017 AGC Community Award, Platinum Winner, and the 2017 Safe Contractor Award. It also has accreditation from the U.S. Green Building Council (USGBC) and LEED.

One of the firm’s recently-completed projects is the Reynolds American, Inc. office in RAI Plaza, with 313,500 square feet across eleven floors. Workspaces received upgrades with a new HVAC, more color and graphic design, and increased use of glass to let in natural light. The firm wanted to create an open workspace that creates a “neighborhood feel” throughout the office where people can interact, walk around during their break, and have an overall upbeat ambiance. An office like this is sure to keep employees motivated. Today, many offices would like to have a more modern and open design that incorporates excellent working practices and promotes better work. With an office like this, it’s sure to help employees and everyone else motivated and satisfied. Rick Shandy, Todd Rocha, and Neal Linegar established BnK Construction Inc. in 1995. The three have a combined experience of over 70 years in the industry and have handled numerous types of projects from retail to restaurants to multifamily. The firm’s projects have a modern contemporary structure from bright lighting, open spaces, and sophisticated furniture.

An example of the firm’s work is this office in Clackamas. It has many meeting and conference rooms that are more on the professional side. But the rest of the office has a vibrant atmosphere, with large open spaces and a colorful ambiance. The space has several couches and seats where people can opt to work instead of a typical cubicle, giving the employees a chance to switch up their work environment. The firm believes that this kind of variety keeps people motivated to perform at their best; atmosphere and ambiance can affect people’s moods and mindset. This project does an excellent job maintaining a sense of professionalism but incorporates an open workspace. The Mirador Office is an 11,600 square feet modern office that incorporates two floors for its employees. It has multiple open office areas, conference rooms, individual offices, break rooms, and even a large game area. Having break rooms and a recreational area is an aspect that companies are incorporating in the workplace in order to prevent burnout. Giving people an option to do something different yet be productive every day can help employees’ mood and performance. Colas Construction was established in 1997 and is currently being operated by Andrew, Aneshka, and Alexander Colas. Their father, Hermann Colas Jr., started the firm after a bad experience during the construction of their home. Today, the firm has completed quite a range of projects that incorporates many various designs and structures, ranging from bars, arcades, schools, offices, etc.

The featured office for Acme Construction Supply is a two-story 10,800-square-foot office that is designed for productivity. The space is a contemporary-style office, able to incorporate both work and play. It provides areas for work, games, and even naps, creating a healthy environment and allowing employees to have the freedom to rest and recharge. Aside from conference rooms and cubicles, the space includes a beautiful outdoor deck, a full-on kitchen and dining area, and lounge areas, giving the office a breath of fresh air with modern designs and state-of-the-art furniture. Corey Lohman began his career in Emerick Construction as a project engineer. He later established start a new division in the company and, in 2011, was appointed as the firm’s president. Some of its clients are Din Tai Fung, Bank of the West, MTV Real World, and Nautilus World HQ.

One of the firm’s recently completed projects is the Woodruff Sawyer office, a modern, structured office with lounge areas, kitchen and dining areas, sophisticated conference rooms and meeting rooms, and open areas. The bright and colorful aesthetic helps to create a happy atmosphere, and a full kitchen and dining area provide the perfect space to take a break. Amenities like lounge areas allow employees to move around the office and work in a slightly different environment, which can improve productivity. A notable project the firm completed is this 9,434 square feet Airbnb office expansion. It’s a beautiful workplace, incorporating both professionalism and interaction. It has numerous conference rooms, seminar areas, and lounge areas, which creates a well-balanced environment. Having many spaces for work, regardless of a team or individual, offers rooms to work and invites people to interact with each other, since the office is a large open space. The space is furnished in a contemporary style with colorful accents. This 34,470 square feet office is a multi-level building with large dining areas, lounge areas, conference rooms, and massive office space. The office is designed to provide numerous types of workspace—even the large staircase is a place where people can meet. The dining area is relatively large, with a state-of-the-art kitchen, and the lounge area has a couch and TV. There are no cubicle spaces for the main office space—rather, the office is an open work environment where there are no divisions between people. It has long tables with multiple workstations, and incorporates tall windows that allow an influx of natural light. Hoffman Construction Company, founded in 1922 by Lee Hawley Hoffman, is currently managed by Dave Drinkward. The firm has completed numerous projects of various sizes and styles, from laboratories to sports centers, and prioritizes adapting its practices with the progression of technology.

The Simplot World Headquarters is a 260,000-square-foot nine-story office building. It’s said to be the “office of the future” with its light-filled collaborative spaces, office space, research and cafeteria kitchen, and employee support facilities. The space also includes a retail and restaurant space that occupies the ground floor, a commercial greenhouse, research lab space, and auditorium. The building is located in Boise’s downtown area, where the firm had to use the Lean construction technique, which involves maximizing the prefabrication of the building components, such as stairs and piping. Lorentz Bruun Construction (LBC) was established in 1946, immediately after World War II, and today’s operations are run by the third generation of family members. The firm’s principal is Erik Bruun with his three grandchildren Mark, Kurt, and Erik leading the company. Over the course of 75 years, and with one of the oldest CCB numbers, LBC has developed time tested and proven methods for effectively delivering consistent practices and professionalism in construction services. The firm has completed a variety of projects, including the Janey II Apartments, Oregon Rail Heritage Foundation, Collins Lake Resort, and the Rose/Moda Center. R&H Construction was founded in 1979 and is currently operated by president and CEO John Ward. It has garnered features from the Portland Business Journal for the Most Admired Companies and 100 Best Companies, and 100 Best Green Companies from the Oregon Business Magazine. Some of the notable clients the firm has worked with include Muji, Mercedes Benz, Toyota, and the Sunriver Resort.

The Redfox Commons project is the conversion of two 1940s warehouses into a modern office building. The firm used the old materials in the warehouse for the exposed column and beams, but different processes were essential to make it sturdier. A bridge connects the two warehouses, with open spaces that allow people to interact and socialize. It’s an up to date office that caters to today’s office culture, with open work environments and the right amount of space for breaks and interactions. 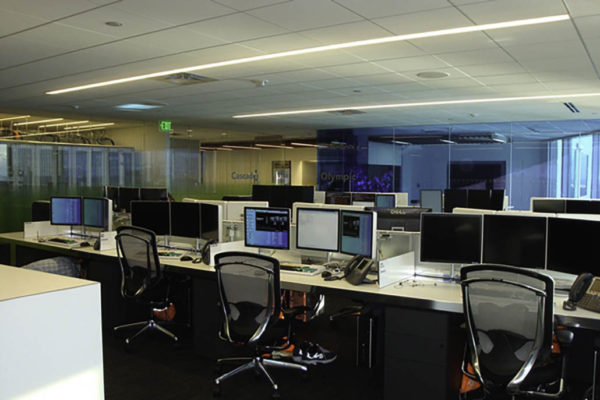 Swinerton has been in the industry for a very long time. Alfred Bingham Swinerton established it in 1888, and today Eric Foster is the CEO. The firm has won numerous awards, such as the 2019 “Best Project” by ENR Northwest, ENR Mountain States 2020 Top Young Professional, Orange County Administration South Regional Project of the Year, and many others. Some of the firm’s notable clients include the Emerald Queen Casino, Harborview Medical Center, and Wells Fargo.

The Bloomberg office project is a modern office space. It’s a sleek, contemporary workplace, incorporating professionalism and leaving room for rest. Amenities include a beautiful modern kitchen, an aquarium, and a lounge area with four TVs, as well as a bar table and chairs. The meeting rooms are beautifully decorated and offer a great view of the city. The common office space is an open area with no cubicles, allowing people to interact easily The firm completed the featured office for Lamar Advertising, creating a bright and colorful space with separate open rooms. Even the conference room has a very bright aesthetic. The color scheme helps the creative people get their ideas flowing, and having open spaces where people can interact with one another aids in sharing ideas for various projects. This style of office can be quite unconventional for some people, but it still retains some modern aspects that other corporate companies have. It’s a unique structure and colorful ambiance that can set offices apart from others.

Learn the about the best architects in Portland. See rankings of the top architects and examples of their work they are designing.

Find out how much your project will cost
We will get you competitive bids from the top architects
and contractors in your area.
By submitting the form, you agree to our Terms of Service.